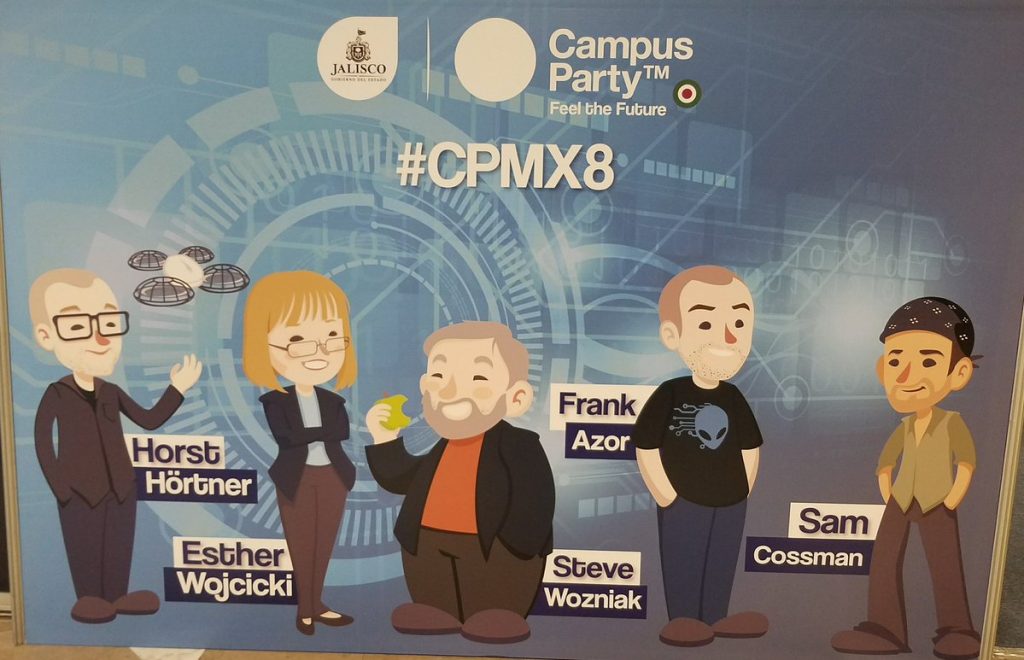 This is the top technological event in Mexico.

If you are looking to fully experience, live, taste and learn technology Campus Party is the place (also known as CPMX8).

It happens once in a year and is considered the top technological event in Mexico: 24 hrs. during 5 days sharing activities and content, an area of 107, 600 ft. facilities, 11 stages, 1500 content hrs., 40 workshops, 600+ technical communities.

The best of all is that people responded positively. A total of 25 thousand people attended this year event edition and this is the 4th year happening.

This is a space where people can meet other technology lovers, can interact with tech celebrities, can get inspired. People from all over the country find in Campus Party a meeting point.

Campus party promotes people to learn from others but also to experiment and make, to try to test and re-do. The “Makers” zone is a space where people can join pieces and arm drones, robots, circuits or even use the 3D printer and create their own pieces.

Let´s talk about the main speakers, even though is worthy to say that hourly there is a speaker on each one of the 11 stages.The audience was delighted with such national but also international celebrities.

We heard Paul Zaloom (Beakman) spreading with simple words and experiments how simple science is.

We really enjoyed Sam Cossman (Nat Geo) who decided to leave his professional career and went to look for his passion: nature. He got into the volcanoes fascination. Suddenly he became a leading expert on the topic and discovered that working in a team is better than by his own. Now Sam leaders scientists and promotes technology in clothes and gadgets with the only purpose to share with people the experiences he lives while going into craters.

Frank Azor (Alienware, Dell) is the main responsible for creating powerful computers for the gaming industry. On the main stage,  with amazing screens and great sound, he showed us the power of the gaming industry. But not only that, he shared his vision of how hardware (Virtual reality) working with Artificial intelligence will save ALL data that a person can produce while participating in an Artificial world. So this means that data analytics is just starting. The combination of VR + AI is not just used to play; it is also useful to train people in practically any field.

Esther Wojcicki (Creative Commons) was always involved in education, she was presented as the teacher of Steve Job´s children but also declared that her house was the place where Google started. Esther began her speech by saying “Schools must be like Campus Party” a place where people can learn by doing and experimenting. “Nobody learns to swim by reading a book” they learn by doing it.

Steve Wozniak (Apple 1) there is no much to say but the excitement to listen to his speech. His passion has always been to create and share with others; he confessed he wanted to be recognized by his talent in engineering. He had difficult times while learning and his advice is to keep trying, never give up and follow your passion, never be motivated by money.

Attend Campus Party, either if you are starting your career or if you are already a professional or if you are a company like ScreenIT. Get energized with so many talents on the stage and skilled IT professionals spread in all the facilities, you will see, hear breath the trends in the ICT industry. There are so many workshops where you can learn and experiment.

ScreenIT is always interested in identifying where the tech talent -including developers- is in our country as well as be updated in this industry.

Let´s wait the next year to continue being part of Campus Party   CPMX9.